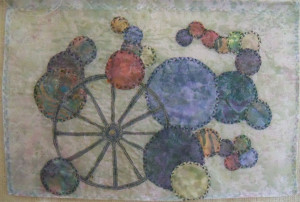 I belong to a group called Fearless Designers. It’s a group of ten women who have been meeting once a month for a few years. We have worked hard to learn about design principles and offering constructive critiques during our times together.

This year we decided to challenge ourselves by interpreting a different word each month over a ten month period.

Our first word for last September was Jubilation. For me this was a very difficult word as my husband died in July and I was not feeling particularly jubilant during that time. But as I thought about his death, the calling hours and the services afterwords, I realized that there were these waves (circles) of friends who were there offering support in a variety of ways……….client friends, friends from church, book club members, quilting group members, church friends, organization friends, neighbors, family and so on.

My husband and I met under the Ferris wheel in Old Orchard Beach, Maine and one of his favorite sayings was “We’ve been going round and round ever since.” So I used that Ferris wheel and the circles of friends that sometimes intersected and sometimes did not to make my interpretation of jubilation. For it’s with the support of our friends that we get through the difficult times.